Not many maritimers find themselves in August gazing out, next to the mouth of the Great Whale River, at the vastness of Hudson Bay.

This past summer, Paul Bell, who works at Poehls Auto Recycling in Kentville, NS, was doing just that. He had the experience of a lifetime sharing his professional experience in the adjoining remote Nunavik communities in northern Quebec of Kuujjuarapik and Whapmagoostui (combined population about 1500), as part of Scout Environmental’s “Tundra Take Back” program. Paul spent two weeks in the community sharing his knowledge, skills and the best practices of modern recycling with two other volunteers who were flown in and room and boarded by the Program.

The “Tundra Take Back” program is one of several initiatives established by Scout Environmental that sends qualified volunteers to remote northern communities to work with local community members to deal with the safe handling and recycling of end of life vehicles and large machinery, appliances and associated fluids. Paul was there with two other volunteers and, during their stint, they trained six locals in modern recycling methods.

Recycling in a remote community that is only accessibly by air year-round and by ship for a window in the warmer months is far different than in Nova Scotia or anywhere south of 60. A bit of improvisation is required and to this end some of the community’s snow removal equipment was repurposed to crush the vehicles down to size and for removal to a safe holding site outside the community. Ultimately the scrap and safely stored fluids were destined for shipping to the south when the sea lanes were free and the transport and supply ships could steam in to drop off their usual load of months-worth of supplies and pick up the recycling.

Paul’s first comments in discussing this adventure were to relate the “unbelievable beauty and sheer expanse” of being on the edge of Hudson Bay and the warmth and kindness of the residents and their welcoming and well maintained little corner of Quebec. He was also quick to point out that although indeed a very isolated spot on the map, it’s not remote enough to keep that icon of Canadian caffeine in a cup from having an outlet, that does double duty also serving up well known fried chicken, albeit at a cost for a sandwich that would be measured in buckets of extra crispy in the Maritimes. Hoping for a glimpse of some perhaps unique to the North wildlife what Paul got was the sight of a lot of geese. The Co-op Hotel was comfy, the food fine, connection to the wider world easy via satellite TV and the satisfaction of helping keep a community safe and clean rewarding.

The team spent most of their time dealing with the recycling load which added up to over one hundred automobiles, appliances, boats, a few pieces of heavy equipment, snowmobiles and snow blowers and other miscellaneous implements. One thing that was not on the recycling list but caught the attention of Paul and the others were two old Bombardier Snow Buses, formerly in the service of Hydro Quebec, in traditional yellow, still looking pretty solid for such ancient beasts. Once ubiquitous in the north these are a pretty rare sight these days. Probably relics of the days when government considered damming the Great Whale River.

Paul’s experience was priceless and, without missing a beat, asked whether he’d return to the North with the program again, he replied: “oh, yeah – no question, I’m there! I’d love to get others in our industry involved too.” As he points out, it is so critical to ensure that modern and safe recycling practices are used and in place everywhere it is perhaps no more so than in remote communities, like those in Nunavik, where the environment is particularly fragile and the people’s dependence on it for healthy survival so vital. Over the course of only a couple of weeks, Paul, his fellow recycling pros and the team of locals covered a lot of ground in protecting the health of the community and the planet for years to come.

Further information about the Tundra Take Back program and other similar projects run and initiated by Scout Environmental is available at: http:// scoutenvironmental.com/programs/program/tundra-take-back-nunavik 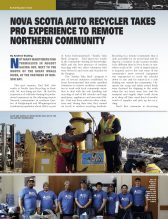 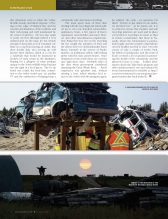